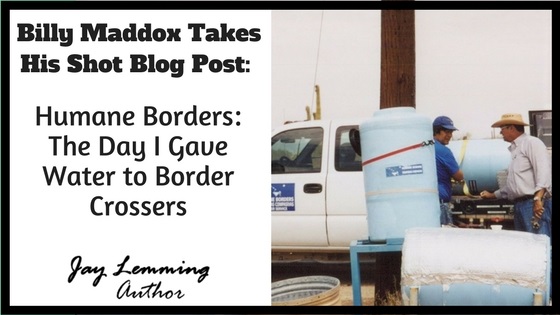 Although Humane Borders claims not to be making a political statement with its water jugs, it has received its share of criticism over the years, including in this Washington Times article, for encouraging and abetting migration, as well as for aiding alien and drug smugglers.

After I called Reverend Robin Hoover, founder of Humane Borders, to schedule a sit-down interview, he said that was fine and asked me to meet him at his church, First Christian in Tucson, on a particular morning. When I showed up one sunny day several weeks later, instead of finding a cool office, some comfortable chairs and an offer of a cup of coffee, I found myself thrown in with a group of volunteers sorting dried fruit, hoses and water tanks in the church parking lot.

Reverend Hoover, who was there, gave me a quick nod. My name was on the list of volunteers scheduled to head out into the desert and drop off the water jugs. Really? I thought. I guess he figured an interview wouldn’t be nearly as effective as getting me out there to see what Humane Borders was all about.

Within a few hours, five of us were headed west out of Tucson on I-86, which pierces the heart of the Sonoran Desert. We drove for two hours through the scorching heat toward the oddly named town of Why. We were in a somewhat beat-up pick-up truck with one giant, sausage-shaped water tank drilled into the truck’s flat bed, and surrounded by tied-down empty water containers we would end up filling from the tank and pour into the jugs for border crossers once we arrived at our designated locations. The truck didn’t have the best suspension in the world and we spent time during that long tedious ride across the desert discussing current events and, in particular, the recent U.S. invasion of Iraq.

I rode shotgun, and then there was the Latino driver and three twenty-somethings in the back seat. We joked about the spoof someone had put online where if you Googled “weapons of mass destruction”, the first search result was a play off the Page Not Displayed message: These Weapons of Mass Destruction Cannot be Displayed. We talked about the likelihood that Iraq had anything at all to do with the September 11 attacks.

We didn’t know each other but camaraderie came easily since we were all in the vehicle together with the common purpose of saving lives. No one was really talking about much else those days except for Iraq.

We weren’t driving all the way out to Why. Reverend Hoover and his team do more than randomly place water jugs in the desert. Even back then, only three years into the existence of Humane Borders, the outfit already had sufficient data about migrant deaths to have a sense of where the popular, high-risk crossing corridors were, and where water jugs would be most beneficial.

Our group of five ended up, as a result, in some of the most remote locations of the Sonoran Desert, including in the Pipe Organ Cactus National Monument, which is federally protected land due to the plants and wildlife. We reached the location where we would set up the jugs with the aid of a GPS, and our driver began muttering, as he pulled out the hose, about all the desert capers, pomegranates and cereus that migrants trash on their way north.

It took a while to fill the large jugs from the tank and water containers. The jugs were originally 55-gallon syrup containers, donated by Coca Cola and painted blue to stand out against the tawny desert hues to help border crossers see them. The color also prevents algae from growing in the water.

In Billy Maddox Takes His Shot, the topic of the Humane Border water jugs is the subject that starts a severe argument between Billy and his father. Billy and his wife, Jessie, are hosting a barbecue for some family and friends and Hector Maddox, Billy’s father, begins to argue with Carl Daniels, one of Billy’s buddies from the Border Patrol.

His father’s voice rose and Billy rushed over. Hector stood over Carl who somehow managed to remain calm at the picnic table. “You don’t see a problem,” Hector yelled, “giving water to Mexicans and making it easy for them to cross the border? It’s your job to keep them out! What the hell kind of Border Patrol agent are you?”

“Why not? They certainly deserve it for not staying where they belong.”

“What I object to is your watching the jugs,” Mark chimed in. “Even if it’s legal, it can’t be ethical.”

“What are you talking about?” Billy asked. Jugs?

“Those Mexicans know they’re not supposed to be here,” Hector kept on. “If they want to risk their lives crossing the desert, that’s their business.”

You can’t have a conversation about Arizona for five minutes, Billy thought, without someone getting pissed about something. He knew Humane Borders. They operated out of Tucson and maintained water stations in areas of the desert where migrants often died from exposure.

Notwithstanding the polarizing impact of Humane Borders as demonstrated in the scene above, giving water to migrants is an experience unique to the southwestern border. Our driver had been on many volunteer runs before and told me he has seen groups of border crossers who don’t feel safe enough to get too close but linger within sight of the jugs so that after Humane Borders volunteers have gone, they will come in for water before continuing their northbound journey.

It has been more than 10 years since the day I volunteered but Humane Borders still is going strong. The Christian Science Monitor reported back in 2007 that Humane Borders had 63 trained drivers, approximately 8,000 volunteers and 84 water stations on both sides of the Arizona border. The organization’s pump trucks make around 750 trips out to the desert each year.

Robin Hoover’s fame and/or notoriety has also put him in something of an international spotlight, and he presented on human rights issues for the World Council of Churches during United Nations Advocacy Week in November 2008.

As mentioned above, Humane Borders has been the subject of heavy scrutiny. But the organization’s stature has become significant enough that its leaders have developed criticisms of their own. They accuse those actively opposed to illegal migration of lingering around their blue jugs hoping to nab border crossers. At least in this 2009 report by the Green Party of the United States, the Border Patrol would seem to have agreed not to watch water stations. But private vigilante groups make no such promise. (Accusations that Border Patrol agents watch Humane Borders water tanks actually lead to an argument in one scene of Billy Maddox Takes His Shot.)

In another post, I highlight that an increasing number of arrests in the Rio Grande Valley in 2014 reflects the growing popularity of Texas as a land route across the U.S.-Mexican border. In researching this post about Humane Borders, I learned that Reverend Hoover has been aware for several years of the rising number of migrant deaths around Texas. In 2012, he relocated to Fort Worth along with his humanitarian vision.

My day of giving water to migrants is long gone but the organization’s mission continues.