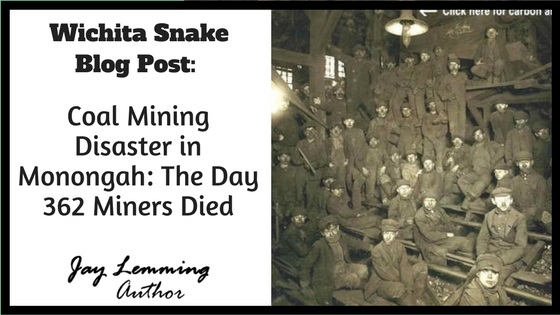 Wichita Snake is a planned novella (or novel, I really don’t know yet) about Glen Marshall, a former miner from Monongah, West Virginia who, in 1907, arrives in Wichita, Kansas shortly after his wife, Abigail Maris, is murdered at the hands of a cold-blooded crime syndicate. The syndicate manages a significant amount of business that occurs in temperance-era Kansas under the presumptive sponsorship of the Wichita Chamber of Commerce. The Wichita Snake himself, Old Smokey Jones, has established himself as a leading member of the chamber’s membership committee.

Glen Marshall, who will later become William Maddox, Arizona Ranger and great-grandfather to Billy Maddox, has fled the mining life in Monongah just after an unspeakable mine explosion that killed hundreds of men and boys.

The mining disaster that sends Glen and Abby out west is not fiction. On December 6, 1907, just before 10:30 in the morning, a series of explosions in Number 6 and 8 mines in Monongah caused disruption not only underground but above ground as well. They rocked buildings in their foundations, tossed people like rag dolls and treated the transportation system like putty. Street cars were thrown from their rails like toys; horses fell on the streets as though light as feathers.

Such was the force of the explosions.

In all, 362 mining men and boys were officially counted as dead though mining companies in the early 20th century kept such notoriously poor records that many more workers were reputed to have perished as well. In Monongah: The Tragic Story of the 1907 Monongah Mine Disaster, Davitt McAteer suspects closer to 500 men were killed. What could be counted, however, were the number of widows (250) and children (around 1,000) left instantly without husbands and fathers.

Varying accounts of the disaster point not only to the collapse of the mines following the explosions but to the destruction of the ventilation system which, when operational, prevented the build up of toxic fumes in the compressed spaces where miners worked underground. Rescue efforts, as a result, were hampered by the presence of black damp (which included carbon dioxide and nitrogen, but no oxygen) and whitedamp, which was primarily carbon monoxide. Rescuers could not go in and what miners may have survived the blasts presumably could not come out.

Even had survivors been able to breathe in an oxygen-free environment, their way to the surface would have been prevented by the collapse of the entrance of mine number 6 and the obstruction by wrecked ore cars at the mine’s primary entrance.

Sadly, a disaster of this nature was just waiting to happen. Since the Norfolk and Western Railroad entered the state in the 1880s, West Virginia had become one of the largest coal producers in the country, drawing African and European workers to a newly booming economy. The surname of Glen’s wife Abigail, Maris, hints at her French ancestry. The new influx of laborers to the coalfields did not, however, lead to especially robust safety measures. Up to and, for some years, through the Fairmont coal mining disaster, West Virginia remained one of the most unregulated states in the country.

Three years afterward, however, and partly as a result of the mine explosion (along with many others in the country), the United State Congress established the U.S. Bureau of Mines to inspect mines and prevent conditions that would lead to future tragedies. As a result, history has only theory to determine the cause of the explosions at the Fairmont coal mines: either the accidental ignition of methane and coal dust, or blown-out shots.

In Wichita Snake, the staggering tragedy that was the Fairmont Coal Company disaster convinces William and Abigail to leave home. Abby, already a strong-headed and willful young woman at a young age, has long been unhappy with her parents’ decision to move to West Virginia and take advantage of the coal boom. The explosions take her brother’s life.

And while mining explosions throughout the United States were only increasing in the early 20th century, those in Europe–the continent from which Abby hails–were already on the decline due to effective government intervention.

For those who lived in and around Monongah, West Virginia at the time, meaning for those beyond the realm of my fiction, the tragedy was very real and devastating. The Fairmont coal mine explosions represent the worst mining disaster the nation has ever experienced and, possibly, ever will.

Comment: Were you ever impacted by a significant tragedy or event? Did it change your life or influence you to make a decision that led to a life-changing experience? Leave a comment below.