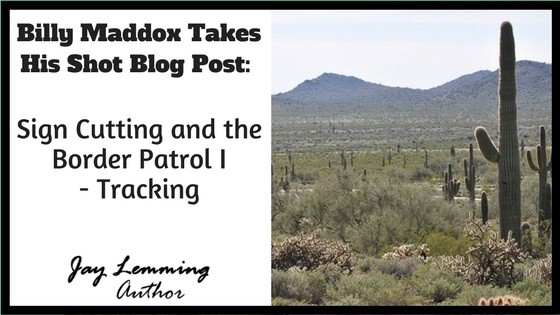 “Cactus Wren” by Andy Blackledge is licensed under CC BY-SA 2.0

If there is something Border Patrol agents know, it is a process for tracking border crossers called “sign cutting”. One definition of sign (not mine) is “physical evidence of disturbance by the passing of people, animals or objects.” Sign is one of the most important resources Border Patrol agents utilize to figure out that desert-crossing immigrants or drug smugglers have passed by. And agents had better be good at it. It is their jobs to track and interdict individuals who have crossed into the United States.

Consider the following example from Billy Maddox Takes His Shot.

Billy Maddox and the veteran agent Carl Daniels are tracking a group of border crossers, and Carl is showing Billy how to read sign the crossers have left behind.

Billy went up to join Carl who approached a youngish man with a shock of red hair who was leaning against the Beetle. He might have been a year or two younger than Billy. He stood at their approach and introduced himself as George from Sasabe. He had called in the sighting.

“How many guys did you see?” Carl asked.

“Three.” George pointed. “They went that way.” Carl crossed back over to the eastern shoulder by the Tahoe and squatted down at the spot where the highway slipped into low creosote. Billy got down beside him. There was a slight chevron-shaped disturbance. 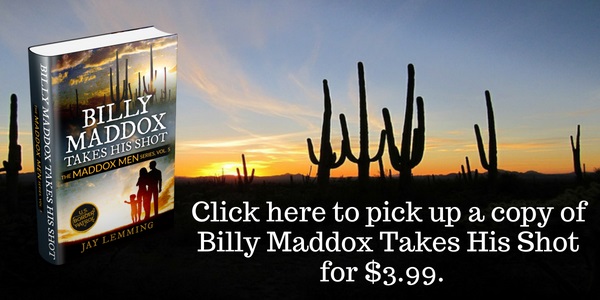 “Bootheel, yes,” Carl said. “An older mark but I’ve seen it before. These aren’t narco smugglers and maybe not first-time crossers either.”

A short, sudden breeze kicked up and Billy closed his eyes to enjoy it as much as he could.

Carl stepped onto the dirt by the northeast-angled chevron. He pointed to a leafy creosote bush where some branches were hacked away. “They cut that to brush out their tracks.”

“Do I get a reward for this?” George asked.

Billy turned from his squatting position. The guy looked like he came from hippie stock. “No.”

“Here’s another heel print they missed,” Carl went on. “Matchstick pattern. That’s a second crosser.” He walked parallel to the sign that headed out through the creosote and up a slight ridge into some prickly-pear cactus. He kept going. Billy stood and placed his hands on his hips.

“Agent Maddox,” Carl called back, when he was about 50 yards from the highway. “Get the binoculars.”

Billy got them from the truck, returned and stepped onto the hardpan, the heat heavier now. It burned his nostrils, a pungent aroma mixed with the rich scent of the desert. He had to swat at a darting swarm of bees before reaching Carl who had crouched by the brushed-out sign.

“That’s what I said,” George said. He had come up behind them.

Carl turned with the binoculars, gazing off toward the mountain tops on the western side of 286.

What is he doing? Billy thought. They’re not going that way.

A shadow fell over him.

“Sir,” Billy said. “Please return to your car.” He was shocked but satisfied when George obeyed. Carl now looked across the desert in the direction the crossers seemed to be heading, clutching the binoculars by his chest.

“Negative.” Carl glanced at the ground. “Anything you can tell me about the sign?”

Billy wiped an arm across his brow.

“Think about what you’re seeing.”

Billy looked hard. “What do you want me to….”

“Are they tired? Are they moving fast?”

“I doubt they’re moving fast. One guy’s taking time to brush out the sign. At least he was…”

Then he saw how the brush strokes suddenly disappeared only to be replaced by clear footprints.

“They only brushed out sign by the road where someone driving by was likely to see it,” Carl explained, perhaps noticing Billy’s surprise. “But they are alert enough to do that, and if they’re also walking in a straight line, it means they have water. They’re strong and alert. They’re likely setting a better pace than another poorly prepared or less-experienced group of crossers. Think about what it would mean if the sign was weaving around all over the place. Even if they weren’t taking time to brush out their sign it would mean they’re disoriented. They’d be moving slower and we’d be on the phone right now with the trauma and rescue team. What you wouldn’t know, Agent Maddox, is why they’re heading in an easterly direction.” He pointed northeast. “Once the sun sets, there’ll be a light out there, the Silver Bell Mine. My guess is they’re crossing to somewhere near the highway to rest until night. They’ll be in a good position to cross 87 and get to the mine and then on to civilization when it’s cool and dark.”

“So what else do you think?” Billy felt stupid.

“They might have a coyote. He would know the mine as a solid landmark. If he’s crossed here before, he’d keep going this way.”

This scene demonstrates how a veteran agent might discover and analyze sign to learn more about the individuals they need to pursue.

Perhaps the most common (though by no means, the only) type of desert sign is footprints. The floor of the Sonoran Desert, which stretches across most of southern Arizona and where a good deal of crossings occur, is impressionable enough to leave evidence of others’ passing.

Border Patrol agents refer to the type of footprint they encounter (as does Carl in the preceding scene) according to a heel or sole type such as a “running W” or a waffle pattern.

Trained agents also recognize different types of footwear such as a cowboy boot (a plain sole with a separate heel mark), a work boot, cross-trainer shoe, a Vibram-type lug sole or Chuck Taylor, to name just a few. Sign evidence that someone wearing carpet booties or huaraches has passed, the latter of which is a type of slipper, will also let agents know they’re likely tracking poorer migrants who can’t afford anything fancier.

One Border Patrol officer speaks about the months’-long training he had to go through with a veteran agent to learn how to identify other, less noticeable sign that can reveal itself in the desert to the sharp eye including kicked dirt, dark soil, broken plant limbs or stomped plants, bits of clothing, water bottles and wrappers.

Experienced border crossers, including  guides-for-hire called coyotes who lead others across the desert for a fee, can make sign cutting difficult for Border Patrol agents by brushing away the footprints they have left behind, often with a bit of creosote bush.

Travel at night also provides two distinct benefits for border crossers. First, it’s much cooler than crossing under the scorching daytime desert sun and therefore crossers expend less energy. Second, the darkness makes it much harder for agents to detect or cut sign.

Border Patrol agents are not always at a disadvantage when it comes to sign cutting, however. While crossers do what they can to evade detection, agents sometimes use a process called leapfrogging to try to get ahead of groups of crossers whose sign they have encountered. (Billy and Carl use this tactic in Billy Maddox Takes His Shot).

Typically, when agents in their trucks encounter sign in the desert, they “line out” the sign to take an educated guess about someplace up ahead where they believe they can intercept the crossers.

Judging by the sign, agents will try to figure out in which direction the crossers seem to be heading. They will simultaneously gauge factors that might be important considerations.

A set of prints that doesn’t seem to be heading in any particular direction but wanders aimlessly around could mean the agents have come across dehydrated (and delirious) crossers, in which case they have a medical emergency on their hands and need to call in medical assistance as soon as possible.

But if the sign is moving in a consistent direction, the tracking agents might figure out what nearby topographical features are motivating crossers to head in that particular direction. A nearby highway could indicate that crossers are heading for a rendezvous with some who has a car, for example.

A Tucson-based humanitarian group called Humane Borders leaves blue water tanks in various locations throughout the desert to ensure thirsty crossers don’t end up dying of thirst. Crossers may rely on the location of these tanks as a way station to someplace place.

The depth of the footprint also speaks to the speed at which border crossers are traveling. Shallow prints indicate speed. These individuals have not stepped in any one spot long enough to leave a strong mark. Deeper, darker prints indicate slower, plodding steps.

Once agents have made an educated guess about how far away the crossers are and where they are heading, the agents will determine where they need to drive to make an interception.

Border Patrol agents have wheels; the border crossers do not. Hence driving up ahead to intercept them is called leapfrogging.

In Part II of this series on sign cutting, I talk more about its history.