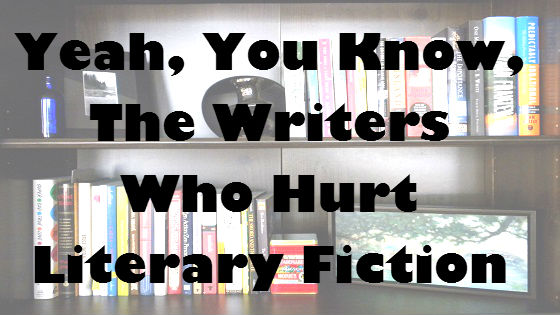 “Bookshelf” by Olatz eta Leire is licensed under CC BY 2.0

Last Friday, I posted a roundup post with four writing, publishing and editing experts. I asked what they thought was the likelihood that literary fiction would successfully translate to the world of independent fiction. The post got a decent amount of retweets, which for a newer blogger like myself was pretty exciting. Of course, when you’re showcasing the founder of the Alliance of Independent Authors (Orna Ross) and a top crusader against vanity presses that like to manipulate authors with misleading marketing shpiels (David Gaughran), you’re bound to get some interest, no matter who you are.

Nevertheless, that post had some ripple effects and I grew involved in some follow-up Twitter exchanges with people who liked and retweeted links to the post. Since I’d clearly struck a nerve, I reached out in an act of market research to get their thoughts on literary fiction. Some flat-out said they think the genre, if you can call it that, is full of pretension. No new news there, as the saying goes.

One Strength of Literary Fiction and One Weakness

Its weakness lies in its pretension. I’m about to do something I really don’t feel comfortable doing most of the time but which, in this case, may be appropriate. I’m going to use a particular author as an example of someone who can give literary fiction a bad name: Jonathan Franzen.

Now for starters, since in general I don’t like trashing anyone, I will say his work has definite merit. I’ve read the two novels probably most readers have picked up before–The Corrections and Freedom. I have not read Purity and I’m not too excited about reading it, either. That may be because of how my opinion of him has shifted over the past few years. But I thought The Corrections was good; I thought Freedom was a worthwhile read too though it suffered from too much advance hype, at least one improbable character and an overly convenient death toward the end of the novel.

Back in 2010, though, when Franzen was promoting Freedom, he made a short promotional video for his novel (see below). He criticized such “little videos” as something that would seem to work at cross-purposes with the idea of reading novels–which, in his opinion, should take readers to a still place. I don’t disagree. Reading does require silence, contemplation and concentration.

But Franzen also has the benefit of celebrity. He is a household name in literary fiction. He has appeared on the cover of Time Magazine with the controversial title “Great American Novelist”. He has a lot going for him and he doesn’t necessarily need to promote himself the way other, lesser-known writers have to.  This is not his fault but no one made him refer condescendingly to “little videos”, which can be used by many writers to generate visibility and increase engagement with readers.

It’s not just that. And Jonathan Franzen does admit (in a somewhat pained tone) that much that concerns publishing has gone online. Yet he has also attacked other writers for engaging in what he perceives as egregious errors in literary behavior. Salman Rushdie, he says in The Guardian, “succumb[ed]” to Twitter. The New Yorker jumped all over that in its Literary Feuds of 2013 column and Rushdie replied to Franzen, via Twitter of course, explaining that he should enjoy his ivory tower.

Franzen has also zinged Jennifer Weiner with accusations of using an argument about gender bias in writing and criticism to promote her own work.

You know, I have no problem with a writer who succeeds wildly despite the arguable merits of his work being not much greater than those of other writers. I’m not a hater and I wish Franzen, and every other successful author, well and congratulations.

And Jonathan Franzen’s way of rubbing others the wrong way has been well-documented for years. But it also reflects one of the great and established criticisms of literary fiction, which is that it attracts a certain “superior” kind of individual.

Whether such a community can comfortably exist in a world of indie fiction, which has only recently began to establish credibility and merit in its own right, remains to be seen.

But those who write or read literary fiction could do themselves and their genre of choice a favor, and stop being so exclusive in their attitudes toward others–including others of their own ilk, for that matter. Twitter has been around for nearly a decade by now, for goodness’ sake. Perhaps the only place it DOESN’T really exist–and one must ask if they even have Internet–is up in the ivory tower!

Comment: What are your thoughts? What other writers do you know that have developed a reputation for pretentiousness and aloof behavior and, in doing so, have damaged the reputation of literary fiction? Comment below.