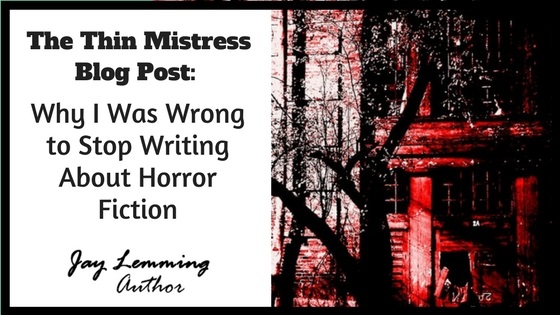 “horror” by Sergey Kochkarev is licensed under CC BY-SA 2.0

I have always been a fan of horror fiction AND literary fiction. It sometimes strikes me as strange that I would be fascinated with both, since one is often dismissed as genre fiction and the other is, in some ways, defined by its lack of positioning within any particular genre of writing.

But the fact remains that both have kept a profound hold on me for some time.

Nevertheless, when I began blogging a little over a year ago, I made an intentional decision to keep my author’s brand as simple as possible. I decided to avoid writing about horror fiction and to concentrate, instead, on literary fiction.

Ah, what a mistake that was.

First of all, I should have realized that ghosts are already prevalent throughout literary fiction and the so-called distinction between the two kinds of writing remains dubious at best. If I’d given Henry James’ novella The Turn of the Screw a fleeting thought, I would have realized that. If Bertha Mason, the woman imprisoned in the attic in Charlotte Bronte’s Jane Eyre, doesn’t disturb readers in some fundamental way, and if I had connected that tidbit to a multitude of similar others that appear within the horror genre–then again, I might have reconsidered my decision. Where in God’s name does one even begin talking about the intersection of horror fiction and a literary masterpiece like Frankenstein?

The compelling draw of writing about horror storytelling also made it a struggle to “stay the course”. In Summer 2014, after going to see the horror flick Oculus in the theater, I couldn’t help but blog about a topic that has always interested me: the role of families in horror films. I kept reminding myself as I was writing the post, that I had promised myself not to write about horror fiction. And then I went ahead and published the post anyway.

Then I went ahead and published a dystopian horror-fantasy-science fiction novella called The Curse of Jaxx. [While I revamp the cover, I have taken down the novella from the Kindle store].

After that, I did well. I stayed “on message”. In late 2014 and throughout 2015, I was busy wrapping up a literary novel, Billy Maddox Takes His Shot. As of the writing of this post, the novel should be published within a month.

I concentrated on blogging about the Southwest border and international border issues since the protagonist in Billy Maddox Takes His Shot is a Border Patrol agent.

Why I Reconsidered Writing About Horror Fiction

But then something changed. As in, only a few weeks ago.

Just the other day, I discovered a tweet by Rachel Amphlett concerning a post on the Signature Reads blog about the literary appeal of haunted houses.

Home to Hurt: On the Literary Appeal of the Haunted House. https://t.co/PMPPZuvvJS #fiction #paranormal

The post highlights a newly published novel, All Things Cease to Appear, by author Elizabeth Brundage. The novel tells the story of two families that at different points in time live in a farmhouse in upstate New York where a couple committed suicide. (I might seriously have to check this story out since I’m originally from upstate New York).

The author of the blog post writes about the novel (and the farmhouse where the tragedy occurred) in context of a tradition of traumatized homes that appears throughout both literary and horror fiction. James’ above-mentioned Turn of the Screw is mentioned, as is The Woman in White by Wilkie Collins, some writings by Ambrose Bierce and the 1977 novel, The Amityville Horror: A True Story.

Reading that blog, and about the literary tradition of haunted houses, made me reconsider my 2014 vow to keep horror fiction out of my blogging.

Also, I recently discovered a blogger, Annie Neugebauer, whose sentiments about the juxtaposition of literary and horror fiction seemed alarmingly similar to mine.

Neugebauer blogged for Writer Unboxed about “Really Going There“, a post about the powerful need for writers to identify and pursue the development of the heart of the story they feel they must tell without fear or concern about audience judgment.

The tie-in to horror?

By way of example, Annie includes in her post a clip of Jack Nicholson seething, jumping around and glaring on the set of The Shining in preparation for the famous ax scene. I won’t link to it here and steal Annie’s thunder. It’s worth reading her post (here it is again) where she links to the scene. Her point in including this video snippet is that if Jack Nicholson had felt any self-consciousness at all about how he chose to get in character with all the set people around him, he chose to ignore it. In doing so, he was able to nail the scene in a way that has frightened more than 35 years worth of moviegoers!

So there’s one example of this literary blogger using an example from the horror genre to make her point. Granted, she was talking about the writing process. BUT…

That Writer Unboxed post was only part of what made me reconsider opening up about my interest in horror storytelling. On her blog just a few days previously, Annie also published a book review of sorts of Toni Morrison’s Beloved, in which a ghost–the avatar for the burden of slavery in 19th-century America–famously dominates the narrative.

That was the tipping point for me.

In hindsight, if I had been honest with myself about why I was avoiding horror fiction in blogging, I would have said it had less to do with believing there really is a distinction to make between literary and horror fiction, and more to do with my above-mentioned fear of adopting a too-complex platform for my author’s brand.

Letting it all hang out, I am now realizing, may be the best way to go, especially if it’s genuine.

What I Already Know About the Literary Aspects of Horror Fiction

I already recognize that ghosts are not just scary, floating dudes in white sheets trying to get the good guys though they often appear as such in unimaginative storytelling (and in John Carpenter’s Halloween). Ghosts are the human expression of an unfinished past–of unattained goals, unrequited emotions, missed actions that resulted in impossible-to-sustain regret or, as in the case of Beloved, actions taken with irreparably horrific consequences.

A ghost is an incarnation–non-material though it may be–of an unbalanced human spirit. And if literary fiction is not defined by the quest for spiritual balance and fulfillment, I don’t know what it is.

In our daily lives (outside the scope of horror fiction), ghosts perpetually haunt us. When, in the midst of doing something, we are overcome by the kind of memory that makes our hands go limp or our heads tilt toward the sky or to a distant line of trees, a ghost has come to visit. If we miss a turn while driving because some situation from our lives has sprung into our present mind wrapped up with fear and worry, a ghost has arrived.

Concerns about the past, or of a possible future, make time wobble. Those are ghosts, my friends.

If I had given my Oculus post from Summer 2014 more than five seconds of thought after I wrote it, I would have concluded that it IS, indeed, a literary post. It is a post about families. Family dynamics have long been a staple of literary fiction, at least since Tolstoy famously wrote his famous opening line for Anna Karenina: “All happy families are alike; each unhappy family is unhappy in its own way.”

So I’m going to STOP misleading myself. I can’t say I’m going to pursue writing horror fiction in the near future. I do have Billy Maddox Takes His Shot, Death to the Children and Other Stories and the Maddox Men series to develop and write about these days.

But if I do feel that a compelling reason materializes to bring horror fiction back into my blogging or into my writing, I will. I am fortunate to have discovered the tweet by Rachel Amphlett (and the blog post behind it) and the recent posts by Annie Neugebauer.

My readers can just accept that as part of my brand, or my platform. The ones who like it will enjoy it. The ones who don’t will go find another writer, and god bless them for doing so; they should just make sure they don’t end up haunted by the ghost of regret. 😉

Comment: Do you read both literary and horror fiction? What do you see as the similarities and what are the differences? Feel free to comment down below.