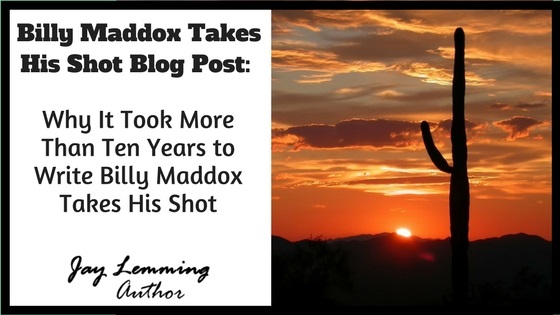 This is a big moment for me.

Within the next few days, I’m going to launch Billy Maddox Takes His Shot, a novel about a Border Patrol agent in Arizona that I began back in 2003.

Novels aren’t supposed to take this long to write. My excitement is mixed with disappointment that the project took this long. But it’s just what happened.

And I can’t tell if I’m at fault or not. At least once during this 13-year journey, I honestly could have said “I’m finished” and moved on to my next novel. But I didn’t. I stuck with the book. I’ll get to that shortly.

My Thanks to a Lot of People

It’s important to note at the outset that, while I’m writing this post in some ways as a kind of consolation for any writer who has been laboring over a project far longer than they ever thought they would, I’m also writing this for a select audience of individuals who has been involved in this project in some capacity over the years.

This audience is composed of current and past friends who know about my passion for writing, members of writing groups I have belonged to in Denver, Colorado and Bethesda, Maryland, relatives who know I have been working on this novel, and various entrepreneurs who have offered me encouragement as I persisted in finishing the story and built out a blog to share it with the world.

The story of Billy Maddox Takes His Shot is also the story of my 30s. People tend to categorize their lives in different ways. We remember and interpret sections of our lives based on where we lived, on relationships and on other easy-to-make connections with people, places, experiences or feelings that allow us to say: this is what my life was like then.

When I was 31 (in 2003), I had just finished my first novel and was ready to launch into a new story about a young Border Patrol agent, despite having absolutely no experience or contacts on the international border.

With support from a grant from the DC Commission on the Arts and Humanities, I traveled to Santa Cruz County, Arizona to research the border region. I went on ride-alongs with Border Patrol agents, interviewed leading (and in some cases polarizing) figures on both ends of the political spectrum as it pertained to illegal border crossings. I toured the Dennis DeConcini port of entry in Nogales, Arizona and traveled into Sonora, Mexico for a few hours with some local guides to check out the maquiladora factories (which at one point played a role in my novel) all in the service of learning about the border region. My research trip included being put up by a family in Rio Rico for a night and having dinner with them and a friend to discuss international border issues. Really, there is no end to what I can tell readers about that trip!

I returned to the DC area after two weeks pumped and excited, and in possession of a slight beard since who can be bothered to shave in the middle of such adventure. Lingering homesickness also possessed me from my time away, which surprised me since I had already lived overseas for a year and had rarely had such a feeling. But that homesickness reminded me I was getting a little older.

Nevertheless, I was ready to write.

It took three years to write a decent draft and in the summer of 2006, I was finished! Or so, I thought, at the time.

I began to pitch literary agents who, if they were excited about my novel, could try to sell it to book publishers. I received some interest including a request from Kim Witherspoon of Inkwell Management to review the entire story. Several weeks later, she sent me a rejection letter that complimented certain aspects of my writing but also pointed out that she did not see any growth in the main character, the Border Patrol agent, Billy Maddox.

While I was disappointed, I was professional enough to know the truth of her words. I realized I had to stop trying to find an agent and start focusing on developing my craft.

The only problem was, I thought my protagonist, Billy Maddox, was pretty awesome. He had developed into an ornery son-of-a-bitch and became a visceral presence to me, the way fictional creations such as Hamlet, Snoopy, Dracula or Jane Eyre become embedded in people’s psyches. The protagonist from the novel I had written before that was never was as real to me.

So I brought the “sick patient to the doctor”. What I mean is that I brought my book to an editor at the Writer’s Center in Bethesda, MD, where I had participated in several novel writers workshops. I hired T. Greenwood, a published writer, editor and teacher, who offered some great advice. She was apologetic in suggesting I cut the first 200 pages of the book but I was nodding my head almost before she finished.

She was right just as Kim Witherspoon had been right. I would say that it was probably at this moment that I began to recognize the craft of my writing as infinitely more important to any success as a writer I experienced than the emotional aspect of self-expression.

I should have known this already, but I didn’t.

At this moment, I basically told myself that if I was going to keep writing books, I had damn well better get my act together.

This experience coincided with an important personal event. I got engaged. In itself, this should not have had a major impact on my writing. Sure, we all have to devote significant amounts of time and energy to build and sustain a relationship. But my fiancée came from a family of writers and academics, so my novel was an immediate conversation piece. Everything, it seemed, was pretty copacetic on that front.

The issue was that my fiancée got a job offer out in Colorado.

I should have taken a pass. I should have realized that all the turbulence that would come from moving would just wreak havoc on my writing. I owed it to myself and to Billy Maddox to keep things low-key while I rewrote the manuscript. But I was in my mid-30s by now and thinking about the passing years. In my mid- to late 20s, I had spent three and a half years moving pathologically from upstate New York to Alaska to the Bronx to Sri Lanka to the Bronx again and then, finally, to Washington, DC.

So it was seven years later now and I had moved NOWHERE during that time. And maybe that stirred something in me. Maybe the tail-end of youth began to play tug of war with my first impending years of middle age. I had to make a decision. I could do the safe thing and stay put.

Or, I could just rage and go with it. And that’s what I did.

I won’t go into too many details about my three years in the Rocky Mountain State. My experience ranged from wonderful to agonizing. I made some amazing friends in Denver, including with several who became part of the most awesome writers’ group a scribe like me could imagine. The hiking took me to some of the most stunning locations I have ever seen, and I even went local and tried snowboarding several times up in Copper and Keystone.

Those blessings were, unfortunately, overshadowed by other troubling realities. I had employment problems the first year and a half in Denver, which coincided with the worst years of the Great Recession. And it was clear, not long after the wedding, that some profound differences existed between me and my spouse.

These challenges had a significant impact on my writing, too. For long stretches of time, I just couldn’t write. My head was not right. My life was not right. Everything went out of whack pretty quickly.

Yes, I did have a great writer’s group who became fast friends, and they helped me tremendously. But the larger reality was that I was a bleeding man walking down the street. I tried, but eventually, too much of the red stuff just kept splashing down onto the sidewalk. I staggered and fell.

All Things Comes to An End

A call from a former employer brought us back to Washington, DC in 2010 and we had a son later that year. My wife and I struggled to make our marriage work but it seemed as though nothing could right our relationship. One step up and two steps back, as Bruce Springsteen once sang. I did very little writing during those years. We had no family in the area to help with our newborn, we lived in a one-bedroom apartment, we fought constantly and eventually, in late 2013, we agreed to separate.

In early 2014, I got an apartment that looks over Rock Creek Park in Bethesda. From my dining room, I could see the branches and reticulated leaves of the oaks and sycamores scarcely 20 feet away. The whoosh of traffic from Beach Road and the scent of what might be wisteria sweep in through the window. It is here, sitting at my dining room table, where I returned to my story, Billy Maddox Takes His Shot, partly because the project had been unfinished for so long, partly because it represented an opportunity to find balance and healing after a dreadful personal experience.

I split custody with my ex-wife 50-50, which is the best way to maintain a strong co-parenting relationship. I keep my son active and involved in things. I am devoted to him and don’t sacrifice my time with him so I can write. But in the evenings, after I have put him to sleep, or in the evenings when he is not with me, or on my free weekends, I have been writing to get this novel done. Through that above-mentioned dining room window, I have witnessed all four seasons rotate. Twice.

The story of Billy Maddox Takes His Shot is my story too. I’m not a Border Patrol agent. I don’t track border crossers in the Sonoran Desert. But I’ve lived real life and I’ve lived an imaginary life at the same time. And something is about to happen.

Billy Maddox Takes His Shot is about to be published.

And it is time for me to move on……

Comment: Have you ever worked on a project for a longer-than-expected time? What were the factors that caused a delay? How did you feel when it was finally finished? Please leave your thoughts in the comments section below