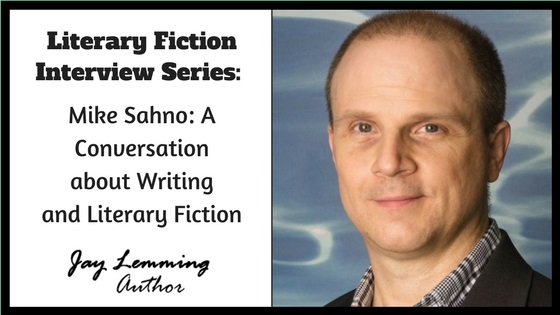 Mike Sahno is the 12th author to participate in my interview series with independent authors of literary fiction. If you publish independently and wish to participate, please click through the image on the right column of the screen that reads “Call for Survey Respondents: Indie Authors of Literary Fiction”. If you wish to receive email notices when future interviews are published, click the link toward the bottom of this post, just above the bio.

Although I’m a very visual writer, the seed of the story was conceptual: it’s about a girl who gets fired from her job because of her sexual orientation.

I feel as though the theme emerged through the telling of the story.

I think my perspective remained the same. I felt quite in control of the narrative for the majority of the time I was working on the novel.

I’ve always believed that there’s a clear delineation between escapist literature and interpretive literature, and for me, literary fiction is interpretive. It has a purpose higher than just entertainment. My publishing company is based on the importance of literary excellence.

I always hope to evoke emotions with characters who readers connect with – for good or ill – and also to create lasting works of art that have genuine literary merit.

I consider myself a writer of accessible literary fiction. I’m not trying to create another Naked Lunch, but I am looking to elevate the conversation. Through my fiction – and the work of other authors I hope to publish – I want to raise the bar of literature in America. Through the development of TV, radio and the internet, we have lost an element that Sahno Publishing is trying to recapture. That’s literary excellence that drives a story that shapes the minds of the people living in that time.

I consider it literary because it’s not genre fiction, and it has elements you don’t find in genre fiction. For example, sections where there’s very little punctuation for several pages in a row, and language that has been described by readers as “lyrical.”

It seems to be pretty closed to independent authors…and again, that’s something I’m working on changing through my company. We need to get back to having literature that is profound, not shallow. We are seeing a dilution of thought in our literature, and I think we need to focus on literature that shapes the society where it’s published. But it’s absurd to think that it’s only going to come from the Big Five publishers; they operate mainly on a financial formula rather than a literary excellence formula.

If I have anything to say about it, it will feature more independent literary authors. My whole goal is to promote literary fiction, and get people reading something better than the light fluff that sells millions. I want great works of art to sell millions! And if Amazon makes some money while people’s minds are getting expanded, then I can live with that.

Comment: Questions or observations for Michael Sahno can be left in the comments section below.  If you’re an author who wishes to join the ranks of other writers of literary fiction who have participated in the LitFic survey, click here.

Michael J. Sahno began writing stories at an early age. Eventually, he was selected for Editor-in-Chief of his high school literary magazine. The quality of his work led to several honorary titles and academic awards by his senior year, which made it clear he was predestined to serve a role in literary excellence.

Mr. Sahno earned his Bachelor’s from Lynchburg College and later went on to earn his Master’s in English from Binghamton University. After college, Mr. Sahno served in several management positions, including Director at a marketing research firm, Assistant Vice President at a Tampa-based mortgage company and college professor in the field of English composition.

Sahno became a full-time professional writer in 2001 and, in the following years, wrote more than 1,000 marketing articles on a wide range of topics.

Mr. Sahno has written and published three novels: Brothers’ Hand, Jana, and Miles of Files. He is the founder of Sahno Publishing and available for professional speaking engagements upon request. For further information, contact info@msahno.com.