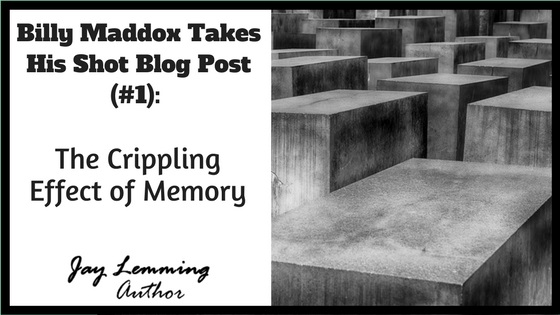 Any life coach will tell you that memory represents one of the most challenging areas in people’s lives. Remembrances of past pain, conflict or misfortune tend to make one hesitate to act. Fear, concern and even bitterness tend to be the offspring of bad experiences, and the impact of memory is no less a feature in some of literature’s most compelling stories. Hamlet broods over his father’s death at the hands of his uncle and mother’s deception. Rochester’s wife goes mad in Jane Eyre and her imprisonment in the attic (the metaphorical equivalent of one’s mind) to hide her from the public eye represents one of the most pleasantly lurid manifestations of the way memory never dies — if you’re into that sort of thing.

Memory is not only a reality, but a crippling one for Billy Maddox, the young protagonist at the heart of the novel Billy Maddox Takes His Shot.

The death of Billy’s brother in the midst of a shootout between Border Patrol agents and drug mules at the Maddox family ranch near the internal border with Mexico in Cochise County, Arizona leaves a scar that is only compounded by future events in Billy’s life. His parents, paralyzed with shock by the death of their youngest son, turn inward and fail in their parenting duties for Billy. Billy, in turn, begins to act out, unable to find an appropriate channel for his grief. Bouts of anger, fighting and the growing perception that he is nothing but a troublemaker continue to plague him all the way through high school.

When Billy accidentally gets his girlfriend pregnant, his new role as father ends up being something of a redeeming factor (I will blog about this in the near future). His father’s collapse after Billy’s brother’s death serves as a reminder for Billy of effective parenting, and he vows (and largely follows through on his promise) to be a caring, responsible parent. But the larger impact of Billy’s unresolved grief continues to lead to fits of impulsive hotheadedness that result in several lost jobs. His new wife, Jessica, works hard and patiently to try to keep the family together in the face of Billy’s unstable disposition.

But as Billy Maddox Takes His Shot opens, it is clear that she is at the end of her rope. Billy is about to begin his new job as Border Patrol Agent in Arizona’s Tucson Sector. The job will take Billy back to the environment where he first lost his brother. It is both an opportunity to find peace with the past but also to potentially collapse under its overwhelming weight.

Reading is often a matter of effective identification between reader and character. Although very few of us will ever find ourselves in Billy Maddox’s particular situation, most of us have undoubtedly experienced a similar kind of disappointment and loss that can lead to anger, hard feelings and self-destructive behaviors.

And if you’re not already on my mailing list, please consider signing up. I will continue to blog about themes relevant to Billy Maddox Takes His Shot and email out notifications when those posts are available.