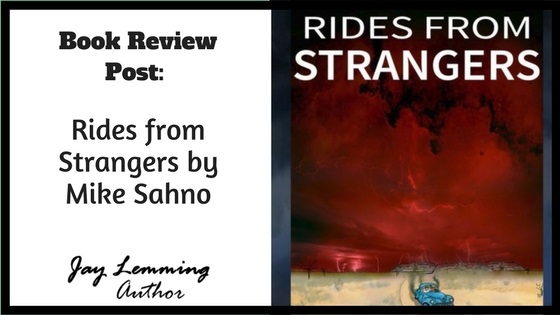 The first thing one notices upon reading through the nine stories collected in Rides From Strangers by independent author Mike Sahno is how empty-feeling everyone is. If one experience can be said to tie together all the protagonists from this provocative compilation of literary tales (with a light touch of magical realism), it’s that of loneliness hard-earned through tough encounters with others. Mike Sahno is the author of three previous books, Jana, Brothers’ Hand and Miles of Files (which recently relaunched). Rides from Strangers is his first collection of stories, though he demonstrates effortless ease in developing these tales, which leave the reader with a desolate sense of loss more typically found in bleak examinations of dystopian society. Though that feeling may not sound good, these stories definitely are.

The book opens with the eponymous tale and follows a vet from the Iraqi War, recently returned to his home outside Amarillo, Texas. Improbably, amidst all the desolation of the exterior landscape (and that within himself from the trauma inflicted by the war), a Mexican drives up in a stunning ’42 Studebaker and invites Ray to come in to not only ride, but to drive. By the time they get to the city, Ray is more than a little perturbed by Jose’s odd mannerisms, the timeless nature of the car that plays Ella Fitzgerald and Frank Sinatra, and the fact that the Amarillo that appears where they arrive is one from decades ago, and no longer the home this former vet remembers.

Thus is the metaphor made real, as articulated by Thomas Wolfe at the beginning of the 20th century, that you really can’t go home again. No soldier who has seen what Ray has can ever escape the damage inflicted by warfare.

The rest of the tales follow suit, highlighting the challenges and disappointments inflicted by others on these stories’ heroes, often leaving scars that cannot heal. The epistolary correspondent in “Father’s Day” purports to write a frank and honest letter to his father, full of respect and hope for his well-being. Simultaneously, he remembers the terrible way this same father treated his wife and children years ago. “Cuervo Sunsets and Waterworks”, a kind of modern retelling of Hemingway’s “Hills Like White Elephants“, introduces a scoundrel who has not only cheated on his wife but rejects any responsibility for the pregnancy of his young stripper girlfriend.

While some stories explicitly portray cases of maltreatment, others reveal the damaged individuals’ quest for solace from others, whether for good or bad. In “Pathological Liar”, a self-confessed prevaricator driving down Bayshore Boulevard may or may not be lying about his encounter with an arousing young woman who holds a gun to him as she forces him to drive to a remote location and have intercourse. The questions about regarding Rich, the driver, are many. What trauma could have driven him to compulsive lying, and what deviant need for connection could have made him imagine a pistol-toting vixen?

In sweeter cases, such as “Creatine”, a young woman in the midst of pondering her own identity (her name is that of an amino acid, she explains) finds a greater sense of purpose when an older lady, Hattie Wilson, drops by the medical facility where she works and admits her grandson has been missing these past two years. Creatine, displaced by the sudden knowledge that people have experienced troubles much deeper than pondering the meaning of their own names, decides she wants to help, contradicting her notion of herself that she is “not a joiner”.

Finally, the most creative tale in the collection is the one that closes it out. In “Strangers”, Melvin B. Strange of New Britain, Connecticut suddenly develops an ability to fly. As he proceeds to travel further and further from home, simply by rising up into the clouds and moving onto other regions and then countries, he begins to pass others who have developed the same remarkable ability– so-called “strangers”, named after him for being the first. As he descends into Rwanda to help a fallen woman give birth, he thinks “…this was what he had to do. Not to be Superman but to go where he was needed, even if just for a moment, wherever that might be.”

The rumination is telling and ties to the main thrust of these stories. While Melvin B. Strange may have first been attracted to this skill to take him away and above the drudgery of a disappointing life and a factory job that smelled of polyvinyl chloride fumes, he ultimately discovers that connection, and lending assistance, rather than escape is his most powerful motive, even if everyone is, to each other, a “stranger”.

The irony in the title, Rides From Strangers, is that people often seek healing from psychic wounds by connecting with others though such connections ultimately caused the initial hurt. There is no escaping the human experience nor the quest for fulfillment through relationships. In some cases, the author deftly empowers his tales by keeping the source of trauma off the page. What horrible slight might convince a young girl to help her friend kill her parents (“Goth”)? We are never told. And again, what scars might make a pathological liar decide that an extreme character represents a nurturing connection? We don’t find out.

Every relationship we join is akin to hopping in a car with a stranger. Once in and once the vehicle has picked up speed, it’s hard to get off. Cars crash, leaving passengers broken and bleeding. And even for those lucky enough to crawl away from the wreckage to live another day, the days that follow are not always easy. And often the healing we seek out ends up being a mirror image of that which brought us down this hard road in the first place.

These stories are good reminders of the complications of human relationships. Author Mike Sahno does an admirable job in the telling.

A complimentary copy of Rides from Strangers is currently available to individuals to subscribe to receive correspondence from author Mike Sahno. Sign up here to get a free copy.