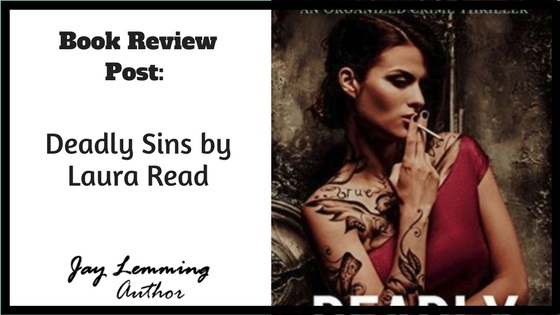 Deadly Sins by Laura Read is a self-proclaimed organized crime thriller that follows the trajectory of Angela Balanescu, the daughter of organized crime boss Leon. Following the murder of Angela’s brother, Joe, by a coke-addicted wife who’d finally broken under the strain of her husband’s infidelities, Angela struggles to align her devotion to her family with a personal allegiance to an equally deep need to discover a purer love not mixed up with violence, greed and mindless promiscuity.

The first thing to discuss in any conversation about Deadly Sins is the cover which is, in my opinion, one of the best-ever covers to reflect a protagonist’s story. Though described as a thriller, the novel carries significant literary impact and the image of a sultry, smoking, hard-looking brunette in a red dress (one shoulder laid bare) beside a moisture-stained cement wall says all it needs to about her personal history. This is a woman bred and raised in a life where things that would horrify most people wouldn’t leave much of an impact on her. She’s seen it all by virtue of playing bookkeeper to the organized crime business of her father and brother.

Yet her tattoo-decorated flesh reflects cravings for expression and of feeling, which she can no longer satisfy with alcohol, smoking and loveless sex. Her brother’s death leads to the demise of Dominic, one of Leon’s employees who pays the ultimate price for not keeping the boss’ son safe. Angela has had something of an affair with Dominic but her lack of sentiment upon learning of his death makes her realize she needs to take her life in a new direction or risk remaining numb to emotion forever.

Enter Sean, a hard-up cop hoping to earn a little something extra by working for Angela’s father and keeping his crime syndicate in the know. To test Sean’s loyalty, Vincent, Leon’s most trusted and sadistic lieutenant, tortures the cop to the point where only Angela’s intervention prevents his death. Vincent has his own complicated romantic feelings for Angela, which is the only thing that leads him to yield to her request to let him go. After Angela tends to Sean’s wounds and brings him home, the two share a spontaneous kiss, and Angela realizes her capacity for love may still be alive after all.

Unfortunately, Joe’s death has left Leon more distraught than Angela realizes, leading him to form a business partnership with one of the most murderous and notorious criminals in the area–a very bad deal, Angela thinks with Vincent in full agreement.

As Deadly Sins progresses, the triangular tensions between Angela and Sean and Vincent escalate, as does the tension between Leon and his new business partner.

Through it all, however, Read artfully shows us Angela in her lonely moments: walking home from the night club Febrile, where strobe lights bounce off walls and dancing bodies, where her father conducts a significant amount of business, and where she picks up strangers for nights of pleasureless sex. Waiting in the car after she has dropped off Sean at his run-down apartment, Angela wonders if she should follow him inside. Getting caught up in conversation with a lonely woman who mysteriously tells her: “I keep thinking there’s someone standing beside me…but when I turn around I realize it’s only my shadow,” Angela wonders whether some deep message is intended for her.

Following one final, unforgivable betrayal, Angela’s shadow is all she can really count on, anyway. Alone, abandoned, let down, and caught up in her father’s world where compassion and mercy have no place, Angela learns the hardest lesson of all from a courageous attempt to believe in love: that at the end of the day, all we really have is ourselves.

It’s a tough lesson to learn, especially for such a strong, intelligent woman who retains an impressive ability to stay true to her nature despite the dark world she inhabits. Angela Balanescu, the heroine of Deadly Sins, is worth wondering about and remembering even after the book is done.

Deadly Sins is on sale now. Click here to purchase a copy.