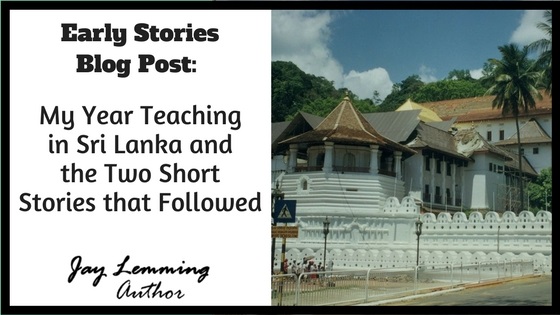 Note: The two short stories shown below, Sandanam and My Scholarship, are available for readers. Contact Jay on the contact form.

Years ago, I joined the Peace Corps, a U.S.-government-funded volunteer organization that sends willing Americans overseas to participate in grassroots projects with the citizens of countries around the world. Some volunteers do community development, others lead health or sustainable agriculture projects. I ended up teaching English as a foreign language in Sri Lanka. I was supposed to live and teach there for two years but the country was in the middle of a civil war at the time, and my assignment ended up being cut in half.

This was the late 1990s. Even though volunteers were restricted to living and traveling in those parts of the country considered safe, Sri Lanka experienced an escalation of activity while I was there by the freedom fighters or terrorists (depending on your political persuasion) known as the Tamil Tigers. The Tigers wanted parts of northern and eastern Sri Lanka to be a new country–a Tamil nation. I lived in the city of Kandy, in the hill country right in the middle of Sri Lanka and, while I was there, a suicide truck bomber ran into an internationally known temple less than two miles from where I lived.

My program was closed early as a result; the Peace Corps is very sensitive to volunteer exposure to violence. While I was there though, I had an unusual assignment. I taught in two schools–a public school, which served primarily economically underprivileged Sri Lanka children, many of whom came from villages outside Kandy. I also taught two days a week at a technical college that served students who had done well during their secondary school education and were hoped to boost their English language skills before applying for jobs in Kandy, the nation’s capital of Colombo or elsewhere.

The technical college was funded and run by a former presidential candidate of Sri Lanka so, on a few occasions, I had a chance to hobnob with some serious players in the country. Americans were an attractive commodity at the time, and everyone wanted to meet and speak with them along all lines of the economic and social spectrum. On the other hand, I also spent a good part of my time invited to the homes of villagers whose children I taught, and who were generous with everything they had.

I already was interested in writing and, during my year in Sri Lanka, I took a lot of notes, transcribed conversations and observed as much as possible. I was pretty emotional in my mid-20s so I’m sure I missed a lot due to wanting to embrace my personal experience in the country.

In any case, I did end up writing about Sri Lanka. I penned two short stories entitled My Scholarship and Sandanam. When I set out to write them, I wanted to avoid–at all costs–writing about an American in Sri Lanka. I try to write stories quite apart from my personal experience. My novel, Billy Maddox Takes His Shot, is about a Border Patrol agent in Arizona (nothing to do with me) and my current novel-in-progress, Green Bay Outsiders, takes place in–you guessed it–Green Bay, Wisconsin, where I have never stepped foot in my life. Nevertheless, Sri Lanka ended up offering untold riches and so I end up writing these two stories composed exclusively of Sri Lankans, using the civil war as the backdrop for both. 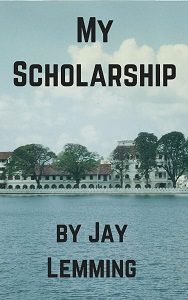 There actually is some small amount of autobiography in this story. I was walking through the streets of Kandy one day when I was approached by a young woman who gave me her “card”. Prostitution was not a known social problem in Sri Lanka and I made a mistake when I told my host family about the experience. They were quite upset and wanted me to give them the card so they could find out who the young woman was and expose her. I already knew she was probably a student at the local University of Peradeniya because a local friend (to whom I had showed the card) told me it was a university number. When my host family said they needed to find out who it was, I pretended I had lost the card and couldn’t give it to them. I had no idea who this young woman was, or why she might have felt compelled to supplement her studies with additional income in this manner. But if she faced tough circumstances back home–a significant percentage of people in the country are economically underprivileged–I didn’t want to cause her any trouble. This was all in my mind, of course. I had no idea who she was. But I ended up letting my imagination take its course and ended up writing a short story called My Scholarship, which featured the young woman I imagined came from this hard background. 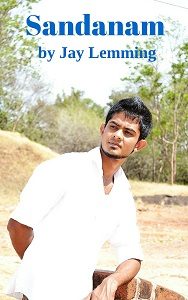 The civil war in Sri Lanka, which ended in the mid-2000s under the controversial presidency of Mahinda Rajapaksa, was fought between the Sinhalese and the Tamils. I won’t go into the history of the fighting or how two separate ethnic perspectives became so entrenched that it led to military operations and suicide bombings. But I will say that during my year living in the country, my time was primarily spent with the Sinhalese. They formed the national government and Kandy, the city in which I lived, was the cultural capital of the Sinhalese. Not all Sinhalese and Tamils hated each other, of course. In fact, most did not. There were non-political players, as there are in all countries, who don’t particularly care about ethnic differences to the point where it causes division. At the technical school where I taught, worked an aged and very friendly Tamil named Sandanam. He is completely unlike the Sandanam in my short story. I simply lifted his name for fictional purposes. Over the years, I also experienced some strained friendships–as we all do–and given the tension between the Sinhalese and Tamils and the backdrop of the civil war, I wrote a story that conflated some personal experiences of mine with those of the two groups engaged in a brutal war.
*************************************
In hindsight, I wished I had applied my writing to more stories that took place in Sri Lanka. But the war is over now (even if ethnic tensions are not entirely gone) and I have a feeling that anything I wrote about the country now would suffer from the passage of time and memories that may have slipped away.

But if you haven’t had a chance to check out the short stories yet, I hope you do. And I would love to hear your feedback about them. Please feel free to comment under the subscription form down below with any questions, and I’ll be sure to answer them. My year in Sri Lanka was amazing though intense and I’m glad I had a chance to experience it.