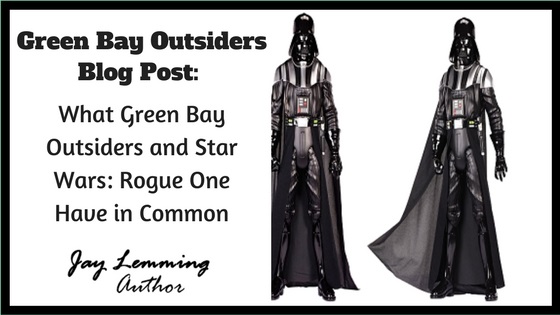 I’m a huge Star Wars fan and it was a big deal when Disney, which owns the rights to Lucasfilm, released Rogue One last December–the first Star Wars film that wasn’t part of one of the trilogies. I thought Rogue One was pretty fantastic for two reasons: one, because the characters had distinct lives and identities of their own, and secondly, because the story ties in closely with the original Star Wars film, “A New Hope”, that came out in 1977. In that film, of course, the Rebel Alliance destroys a planet-killing space station known as the Death Star. Luke Skywalker, the Rebel pilot and Jedi Knight in training, pulls the trigger that does the deed.

One wonders how the evil Empire could have constructed an engineering marvel such as the Death Star while leaving such an absurd flaw that leaves the entire station exposed to the devastating impact of a single shot. That story is the one told in “Rogue One”. My novel, Green Bay Outsiders, has something in common with the relationship between those two movies.

My first novel, Billy Maddox Takes His Shot, was originally published in 2015. It was intended to be a stand-alone novel. But not long after its publication, I began to envision a series of novels that followed the trials and tribulations of the men in the Maddox family, dating back to Billy Maddox’s great-grandfather, Glen Marshall, who was brought up in the mining community of Monongah, West Virginia, in the early 1900s. 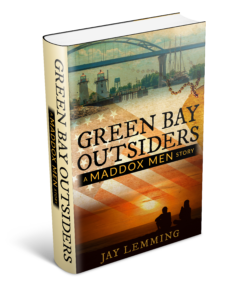 That collection of novels, as I’ve envisioned it, will be called the Maddox Men series, and it will contain (at least) five books. Billy Maddox Takes His Shot, the above-mentioned first novel, takes place in the late 1990s. I have about three quarters of a draft of the second novel, Wichita Snake, which is Glen Marshall’s story and takes place in, you guessed it, Wichita, Kansas. I’ve published one blog post related to Glen’s personal history, which details a real historical event that led to the deaths of more than 350 men and boys in the coal mines of Monongah. The novel after that will be called Rynning. And the following novel or two are, as yet unnamed, but they will continue the saga of the Maddox men leading up to Billy Maddox’s story in Billy Maddox Takes His Shot.

So what does this outline of novels have to do with Green Bay Outsiders and how does it all related to “Star Wars: Rogue One”?

The main character in Green Bay Outsiders, Carl Daniels, first makes an appearance in Billy Maddox Takes His Shot. Carl’s story is an offshoot of the Maddox Men series and deepens the background of a character who played a fairly significant role in Billy’s story. In that sense, just as the story of how the Death Star came to be built with a fatal weakness in Rogue One came to inform the final battle sequence in the film “A New Hope”, Green Bay Outsiders offers a background for Billy’s Border Patrol supervisor as he appears in Billy Maddox Takes His Shot.

About a month ago,when I was having the cover designed for Green Bay Outsiders, I wasn’t quite sure if I should associate the book with the Maddox Men series. Then, being a Star Wars fan, I immediately thought of Rogue One and reviewed movie posters, which simply listed the movie as “A Star Wars Story”. Subsequently, it became a no-brainer for me to design a book cover explaining how Green Bay Outsiders was a “Maddox Men Story”.

The fascinating thing about editing Green Bay Outsiders is that, as the quality of the story improves, it actually changes my perception of Billy Maddox Takes His Shot. That novel no longer seems like a stand-alone story (since it really isn’t anymore) and begins to seem more like one point in a more complex universe.

The writing continues! Green Bay Outsiders will be available in early 2018 and the first scene is available for free by clicking here.

Do you have a favorite film or book series? Is there an offshoot story that doesn’t quite fit with the core stories in the series? What did you like or not like about that offshoot story? Please leave your comment below the subscription form.