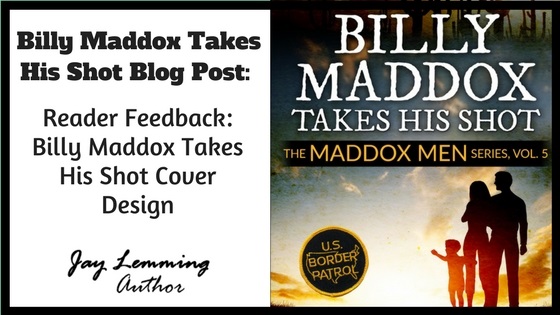 So a decent amount of reader feedback has come back for the three cover designs proposed for my novel, Billy Maddox Takes His Shot, and two cover designs ran almost neck and neck: #2 and #3. Thirteen readers thought Cover #2 was the strongest choice while 12 readers preferred Cover #3. Four readers also weighed in as advocates for #1 with some compelling arguments for why that cover was the strongest. Let’s break down the feedback to determine how to move forward with the final book cover design.

The feedback most closely focused on one of two areas: color and layout. For example, as far as color goes, the blues and purples of the first two covers went over well with some readers–the intensity of the darker hues, especially where they stood in sharp contrast to the title of the book created a vivid feel some thought would stand out well in a bookstore. Others, however, found the darker colors too stark. These readers reminded me that most of Billy Maddox Takes His Shot takes place in Arizona’s Sonoran Desert and, while the darker colors in the sky could well reflect a desert sunset, some of the greens seemed improbably verdant in this environment. Good point.

That doesn’t mean that those readers who preferred the lighter colors though could get away with anything. Yes, some advocates of Cover #3 spoke sensibly of the tawny hues as more representative of the desert. Yet others found the colors too bland and lacking any compelling draw for the reader’s eye. It just goes to show, at the end of the day, that while a book cover needs to reflect some core elements of the novel, it also needs to be catchy enough to get readers’ attention.

Whether or not this feedback deals with the use of color (I would say it does), the silhouettes of the family members also inspired some commentary. At least one reader was impressed with the manner in which the family’s silhouettes worked almost perfectly with the colors and shadows of the dying desert sunset. Covers #1 and #3 received the most scrutiny in this regard since the sun’s illumination impacts the image of the child, whereas in #2, with sharper contrast between the environment and the family members, the impact of the sunset isn’t quite as clear. The boy’s outstretched hand and curiosity clearly have to do with his engagement with the landscape around him. One reader saw the boy’s expression as representing hope, which I’m perfectly fine with, since the protagonist Billy Maddox is, in the novel, responsible for the well-being of his wife and son in an until-now somewhat turbulent household.
So color really had an impact on readers, and made them select in many ways one cover over the other. One reader even commented on the relationship between color and emotion, which I also think is on the mark.

The second area of difference between the covers that readers tended to focus on was in the layout. The absorption of the boy by the sunlight, mentioned above, has as much to do with layout as it does with color. But the main criticism where layout was concerned had to do with whether all the images created one solid narrative, as it does in Cover #2, or whether the images create split pictures (with part on the top and part on the bottom) for Covers #1 and #3. To be honest, I never even considered that. I think I had gotten so used to the cover for Green Bay Outsiders, which has a top part and a bottom part, that I took that design proposal in stride.

But, as I mentioned above, Cover #2 was the most popular of the three covers (if only edging out #3 by a single vote) and at least one reader said, quite decisively, it was because there was a single story told by the collection of images that ran through the cover from top to bottom.
Random other comments also gave me much to think about. One reader wasn’t happy with the Border Patrol insignia, feeling that some readers might feel that badge is a kind of moniker for the entire series. It’s not and the comment was a worthy one. Another reader, who didn’t necessarily have the above-mentioned criticism, nevertheless thought the Border Patrol insignia was too big in Cover #3 and took away from the importance of the family.

The cactus: one especially observant reader noted how, in Cover #2, the tops of the cacti seemed to grow out of the boy’s head like horns. Fair enough. And then, in #1, the cactus looked like it was underground.

To wrap up, some readers who preferred book Cover #3 supported it because they thought it was most similar in nature to Green Bay Outsiders. To be honest, that’s where I originally fell too. But the amount of feedback that has come in has been fantastic and effectively challenged my original idea.

So here is my plan. I will go back to my designer to make some updates to Cover #3 — which just lost being the most popular of the three cover options by a single vote but which is my personal favorite. But I will also work to incorporate some elements from Cover #2, in particular some of the darker colors of the sky–though not necessarily the verdant green since that contrasts with the tawny colors of the Sonoran Desert. In particular, since several readers who liked Cover #2 weren’t quite sold on having two separate images on the cover, I can probably try to create a little more variety between the two by changing up the colors of the sky.

And finally, when I put together the final Green Bay Outsiders cover, I tried to blend all the images together even if they did end up depicting different scenes. That didn’t end up being the case for book covers #1 or #3 of Billy Maddox Takes His Shot. There is no blending, unifying image. But I do want to try to bring them together more than they are now.

So that’s it for now.

But you have helped bring the book cover project this far so I hope that, based on the commentary above, and my intended step forward, that you will continue to provide any feedback you feel would be helpful. You’re welcome to leave a note in the comment section below this post or to email me at jay@jaylemming-author.com.

Please don’t hold back. Your feedback remains valuable and I can’t wait to see what the final copy looks like with your help, so please email me or leave a comment below the subscription bar.