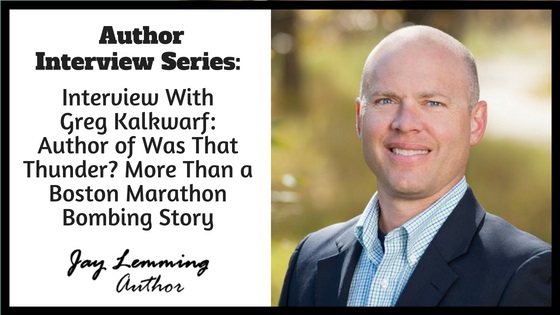 Greg Kalkwarf is the author of “Was That Thunder? More Than a Boston Marathon Bombing Story.” A Nebraska native who currently lives in Colorado, Kalkwarf has completed 10 marathons, including the 2013 Boston Marathon when two terrorists exploded bombs near the finish line, killing three people and injuring more than 250 others. In a 13-month period leading up to the bombing, Kalkwarf experienced a raging forest fire near his family’s mountain home, the tragic death of a family member, the happy birth of a baby girl, and a crosswalk collision with a taxi cab. His book, available on Amazon, illustrates goal-setting, trying new challenges, determination, self-belief, and overcoming adversity.

What inspired you to write Was That Thunder?

I ran the 2013 Boston Marathon as a charity runner for the Alzheimer’s Association. Minutes after I crossed the finish line with a personal record of 3:56:03, two bombs exploded on Boylston Street next to the marathon route. I had pushed hard to break the four-hour mark and was being treated for dehydration and exhaustion in the medical tent about 50 yards away from the first explosion. “Was that thunder?” I naively asked the attendants hovering above me. When we heard another explosion a few seconds later, we knew something was amiss.

Thankfully, my wife and two young children left the area after they saw me cross the finish line and were in a nearby hotel for a post-marathon Alzheimer’s Association reception when the bomb exploded. I had texted my wife as attendants rolled me in a wheelchair to the medical tent, so when she learned about the bombs from news reports, it sparked additional messages (pictures of the screen shots are in my book) that captured her concern. Outside of my teammates that we had met that weekend, we knew no one in Boston, miles from home, and were in the middle of a terrorist attack.

Serendipity is the word that best describes what put us in the right place and the right time. After completing five other marathons, including 26.2 miles up and down Pikes Peak mountain in Colorado, I needed a new challenge. My fastest marathon run, at the time, was about 60 minutes slow of a Boston qualifying time, so I was happy to be accepted onto the Alzheimer’s Association team. Several family members have a history battling Alzheimer’s, which made raising money for a terrific cause a fun challenge. I woke on April 15 confident in completing the marathon but had no idea that I would need a PR to save my family from a terrorist attack.

What is most memorable about that day?

Before the bombs exploded, the day had been terrific. The weather was nearly perfect for a marathon and after some early concerns about stomach issues, I had an amazing run, finishing with my fastest time ever and seeing my family near the finish line. The Boston Marathon is the nation’s oldest marathon, which makes it historic, but it’s the people who line nearly the entire route that make it amazing – the students from the all-girls school Wellesley College create a “Scream Tunnel,” more students from Boston College greet runners in an intoxicated craze, and fans spill out from the Red Sox game at Fenway Park push competitors’ adrenaline near the end of the marathon. As I mention in Was That Thunder?, the yelling and screaming hang over runners like a noise arch. It feels like everyone is cheering for you; the marathon has no enemies.

What was the immediate aftermath of the bombing?

After I left the medical tent, I reunited with my family at the Alzheimer’s Association reception site in a hotel near the finish line. When I knew we were as safe as possible, I realized that I was part of the story and should share my eyewitness perspective. I called the premier news radio station in Colorado and was interviewed live by the afternoon hosts, which led to a series of subsequent interviews on the local, state and national level. The bombing effects and aftermath were horrendous, but I wanted to praise the amazing response I witnessed from Boston Marathon volunteers, medical personnel and first responders.

Our baby girl innocently carried on as if nothing had happened, but our astute son recognized that something serious had occurred. Back in our hotel room, my wife and I kept the TV tuned to local coverage, not just to make sure no additional attacks were expected, but to know if we would be able to fly back to Denver the next day as scheduled. Our flight took off with no delay or incidents, but as we landed back in Colorado, I couldn’t help but post on Facebook, “Physically in Denver, heart still in Boston.”

Did you see how other people were affected?

The finish line medical tent was so large that it had a public address system on the inside. Although only a handful of runners were in the tent at the time of the explosion, a voice soon came over the PA: “There has been an incident. We need everyone to please remain calm. We need to move the runners to the rear of the tent.”

My fellow marathoners and I shuffled along the pavement, our view of the outside blocked by the enclosed tent when medical attendants rolled in the first victim. For a millisecond, I thought, “Oh, no, something happened to a wheelchair racer!” Then, seeing the exposed bone of right tibia, I realized he was a victim.

As volunteers and first responders hustled in an organized chaos in and out of the tent, I thought of the classic TV show M*A*S*H when the voice announced, “Incoming wounded!”

Why did you choose to write about your experience?

After we returned home to Colorado, people wanted to hear my first-person perspective of the marathon and the explosions. Each time I finished telling our too-close-for-comfort experience, my listener would tell me, “Wow, that’s an amazing story. You should write a book!”

As I thought about their comments, I formulated the outline not just of our Boston Marathon experience, but of the 13-month period in my life leading up to April 15, 2013 – events that encompassed a spectrum of emotions and made me recognize that my marathon up and down Pikes Peak through a snowstorm prepared me well.

Was That Thunder? is my first published book, but I have privately written other stories about my life, which has been filled with challenges, adversity, encounters and lots of determination. After my wife told me that she was pregnant with our first child, I realized that if something happened to me, he would not learn about the things that his dad had experienced in life: some funny, some sad, some educational, some just downright crazy. So, I continue to pool those stories and life lessons that I hope to share with both of our children and maybe as another book or two. Plus, I encourage everyone to write down their stories for their future generations and am available as a speaker to share my stories and illustrate how others can capture theirs and create their own serendipity. (Contact Greg via his website: www.gregkalkwarf.com).

How has your participation/experience in the Marathon during the bombing changed you?

I will never again look at a backpack the same way. A backpack used to be something in which a person placed books, a laptop, maybe a change of clothes; now, I see it as possible terrorist weapon. I don’t hesitate to notify authorities if I see an unattended backpack.

While I thought the Boston Marathon had no enemies, I now recognize that the world has people who are intent on causing harm and evil, even to innocent, unsuspecting humans. I am more suspicious, more aware of my surroundings, and try to identify and predict problems and answers for situations that previously never entered my brain. I pray for Boston Marathon bombing victims, survivors and their families, wishing for their recovery and that nothing like this happens again. But, as I write in the book, I am going to live my life as free as ever. When we stop doing things out of fear, that’s when the terrorists win. And I don’t want the terrorists to win.

Was That Thunder: More Than a Boston Marathon Bombing Story by Greg Kalkwarf is now available on Amazon. Click here to pick up a copy.