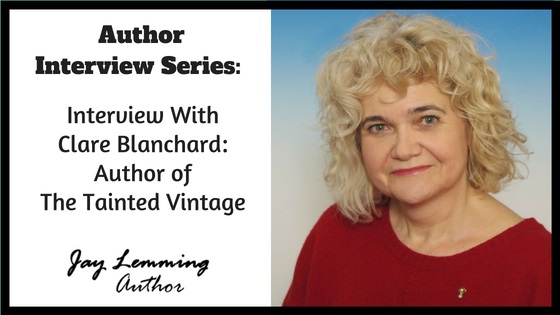 Clare Blanchard writes crime noir mysteries set mainly in the wine country of Central Europe, where her two detectives, Dvorska and Dambersky, are based. But they wander around quite a bit as well, turning up in the United Kingdom and Spain. Her crime stories also have a strong historical thread running through them. Finally, she writes historical mysteries and is in the process, as of this writing in July 2018, of finishing up the edits on one now.

1. What inspired you to write The Tainted Vintage?

I’ve spent half my lifetime living in the beautiful wine-growing region where The Tainted Vintage is set. It has a rich and varied history, and shares a border with the famous Weinviertel region of Lower Austria. The metaphor of wine, and a ‘tainted vintage’ seemed a good way to open my crime mystery series.

2. What is your history with the Czech Republic?

I’m originally from the north of England, but married my Czech husband in 1984. For the first five years after I married there was still a Communist regime in power, controlled from the Soviet Union. That means I was also living there during the Velvet Revolution of November 1989 when the Communist government was toppled. It was quite a time! I was teaching English at a university at that time.

3. You compare your detectives to the Nordic noir TV series “The Killing” and Andrea Camilleri’s Inspector Montalbano. What are the characteristics of all those characters (including the ones you created) that readers will enjoy?

Readers may know the TV series “The Killing”, with the unforgettable character of Sarah Lund. Lund, and Camilleri’s detective Montalbano, are quirky characters. Although “The Killing” is set in Denmark and the Montalbano series is set in Sicily, there are certain dark elements common to both – such as historical corruption and political wheeler-dealing. The crime in these books is not just a crime on the human level. It is also a social and historical event and has a definite context. This is what I am aiming for in my series too. I have a detective duo: Jana Dvorska, who is a bit of a maverick and has a dark history of her own, and Ivan Dambersky, a character who likes to present himself as a bit seedy and jaded, but who is really totally on the ball. He’s also a bit of a closet culture vulture and a wine expert, so he gets to interact well with the people and places he visits during his investigations.

4. What is unique about crime fiction in the Czech Republic? What will readers get from your books that they wouldn’t get elsewhere? What does a typical writing session look like?

As far as I know I am the only crime writer writing in English about the Czech Republic. The country is located geographically right in the heart of Europe, between Germany, Austria and Poland, and is a kind of living monument to the turbulence of European history. This history is absolutely central to my plots, and so is the rich folk culture, art and music. Lager beer was invented in Pilsen in the west of the country, and some of the best beer in the world is brewed there. It is also an incredibly beautiful country, with mountains, forests and incredible architecture. It’s really important to me to give my readers a strong sense of place and time in my books. I want them to see the medieval town squares and the chateaux, and be able to imagine themselves sitting in wine cellars that are many centuries old. I also want them to be able to feel the pull of history in the events of the present.

5. What will we learn about the detectives later in the series? Are you working on the next book?

I have already signed a contract with Fahrenheit Press to publish the second book in the series, which is called The Russian Dolls. The second book is again set mainly in the Czech Republic, but also has quite a bit of the action in Spain, where the body is found. Our detective duo had a rather uneasy start to their working relationship in The Tainted Vintage. They didn’t like each other much at all. But by the second book we see them working well together.

The Russian Dolls is about the murder of a young Czech woman living in Spain. This time the plot will take us to a number of different countries and be much more concerned with organised crime.

7. Tell us about your background as a writer and what you’re working on now.

I’ve always wanted to be a writer. For many years I worked as a translator of other people’s books, which was a great apprenticeship in terms of technique and the disciplines of writing. But there came a point where I just knew I wanted to write my own words and tell my own stories. I’m currently preparing to start the third book in the Dvorska and Dambersky series, which will be about the music industry. My provisional title is The Hook.

8. How can readers stay in touch?

Questions for Clare? Leave them in the comments section below.

As a reminder, The Tainted Vintage is now available on Amazon, or direct from Fahrenheit Press.. Connect with Clare on Twitter and Facebook.
Click here to read other contributions in Jay Lemming’s interview series with authors of literary and contemporary fiction.