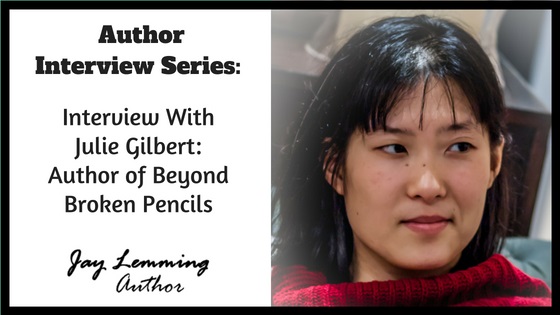 Julie C. Gilbert is a writer and a chemistry teacher. She enjoys listening to audiobooks, taking nice walks, drinking tea, and building Legos. Her upcoming novel, Beyond Broken Pencils, was published on Tuesday, August 7, 2018, and is currently available on Amazon. Read more below.

1. What is your latest work and what is it about?

Blurb for Beyond Broken Pencils by Julie Gilbert:
He has a goal and a plan.

If he carries through with the plan, his sister will die first. His ex will die next, and he will die last. In between, he’ll take out as many people as he can. Students. Security guards. Teachers. First responders. They are all fair game.

Who will live, and who will die? How will those who live go on when their world is shattered by unthinkable tragedy?
***
As you can tell from the blurb, Beyond Broken Pencils is a contemporary story about a school shooting. You’ll meet many ordinary people thrust into a terrifying situation. What are the shooter’s thoughts and motivations?

What do the victims experience? How do students and teachers react to the realization that this is not just a drill? How do the first responders handle such a crisis? These questions and more are addressed in the story.

2. Why did you choose this topic? What do you want your readers to take from it?

School shootings of this kind are becoming more frequent (or at least more frequently reported). I have been a teacher for about a decade and a writer for a little longer than that. Most of the time, I avoid writing about schools, but it seemed like the right time to make an exception.

People get very passionate about the issue of school shootings. Typically, their motives—protecting people, especially young people—are excellent, but their solution is to pick one possible cause and zero in on it. Many factors contribute to such violence, so many things will help a little. It always feels strange to say I hope people enjoy the story because it’s not exactly a feel-good tale, but one of my friends recently reminded me that “feel good” isn’t a criteria for liking something. Conflict gives a story a heartbeat, so in that sense, this one started out with a life of its own. I’d like people to be entertained but also have an opportunity to enter the discussion about preventing tragedies like the one described in Beyond Broken Pencils.

3. Is it like any of your earlier work or are you taking chances with your writing? Explain why. How does this book touch on the literary/contemporary genre.

Most of my works center on characters and how they react to tough situations, so in that sense, this is not new. However, this is the first time I’ve officially entered the literary/contemporary genre. Most of the other stories feature characters with unique gifts that place the story in sci-fi or fantasy. Every genre has its challenges and joys. This round I didn’t have the luxury of special powers to get the characters out of their troubles, but people are inherently resilient.

I had to look up what makes a book fit into literary/contemporary. Some definitions said something along the lines of absence of a genre, but the more helpful ones said it had to be based in reality. Could something like this happen? Yes. Are the characters realistic? Yes. Is the topic relevant. Unfortunately, yes, this happens.

The story doesn’t exactly provide ready answers to the issue of mass murder taking place inside schools. However, it should give a well-rounded look at the issue.

4. Did you discover anything surprising about any of your characters? How they thought, responded or did what they did in their situation, which you wouldn’t have considered before you wrote them into existence?

I’m used to having more options for my characters, but this time, most weren’t FBI agents or genetically altered kids with fighting abilities. They were ordinary people placed in one of the worst “what if” scenarios of our time. Yet on the whole, they rose to the occasion well. Did they experience fear? Certainly. Did they succumb to it? In most cases, no. Did they make strange decisions? Sometimes.

Did they surprise me? Many times, yes. I do only the bare basics of character formation in terms of outlining. I might know their hair color, their eye color, their husband’s name, and whether or not they have a dog, but who they are generally gets formed spur of the moment through the way they think, feel, and speak in various situations.

5. You’re a teacher. Has the tremendous number of school shootings changed how (and how frequently) you think about this topic, and maybe even about your own safety?

Not necessarily. I keep up with the news headlines, but they rotate on to the next big thing fairly quickly. Lockdown drills have become as common as fire drills. I’m of the opinion that any worry beyond just heightening awareness is wasted. Dwelling on the possibilities seems like a swift path to madness. Writing the story got me thinking on the topic a whole heck for the last few months, but the only thing the news of more school shootings has done is solidify the topic’s relevance.

Good and bad things happen in life. While one typically can’t stop the bad, they can control how they respond to the bad. Somebody comes after me with a gun, I’m probably gonna die. That would stink, but worrying won’t change anything.

6. Was the story difficult to write because you know the scenario is all too real for some people?

I initially bounced back and forth between this project and a fantasy one precisely because this one was a tad harder to write than most of my other works. I eventually put the other project aside to concentrate solely on this one, which is the only reason it’s actually done at this point. My stories often have characters facing danger, but most of my other series feature characters that can fight back. It was quite a switch to be writing normal, everyday people who don’t fight crime for a living and see how they react to horror and chaos.

7. What do you think you accomplished for yourself by writing the story?

I write because I love writing. Stories have immense power to entertain, educate, and enlighten. For me, I got to use my intimate knowledge of schools to explore a hard-hitting topic on my own terms. I like trying new things. There are good things to be said for writing light, fluffy reads, but on the flip side, sometimes there’s merit in exploring the dark side of humanity.

8. Tell us about some of your other works and what readers should know about your writing if they’d like to consider reading more of your work in the future.

The first thing people will discover about my writing is probably the fact that I like playing in several very different genres. I will be republishing some slightly reworked novella series that fit in the thriller/suspense genre. Spirit’s Bane is YA/ fantasy. That one was a lot of fun because it featured angels and demons and the fight for the souls of mankind. Thin Black Road is Christian inspirational poetry. I give away free paperbacks of that.

Devya’s Children fits the young adult/ science fiction genres. It starts off with Ashlynn’s Dreams where Jillian discovers she’s a Dream Shaper. You can browse my Amazon page to see blurbs and covers. I’ve even tried my hand at nonfiction with a chemistry book, a teaching book, and a blurb writing book.

The second thing people might notice if they try several series is that I kind of have an obsession with writing FBI agents. Heartfelt Cases (Christian mystery), Scratched Off (mystery/suspense), and the thriller/suspense stories mentioned previously each have very different agents.

Third, although I do my best to keep the plots interesting, most of my stories hinge on the characters. Redeemer Chronicles (Middle Grade fantasy) might have shapeshifters and zombies, but the story centers on a young girl’s quest to discover the full extent of her remarkable gifts and use them to save her people.

9. How long ago did you start writing and what prompted it?

Mass shootings occur quite frequently. There’s no set timeframe on when such incidents occur, but I’d venture a guess at every few months there’s a mass shooting and sometimes those are set in schools. I’d avoided writing about schools for years, but decided late last year to tackle a project eventually. The first official planning stages for this book happened mid-late April 2018. I’d hoped to be able to finish the story by the end of May, but that never happened because I was working on two projects at once. June was kind of crazy too, so I got next to nothing written for about two and a half weeks. Once summer officially started, I buckled down and finished the first draft. I’m still working through proofreading runs, but first draft was done early July 2018.

“A powerful book capable of starting critically important conversations we all need to be having!” ~Cameron S Wright, Adjunct Professor of English
“Disturbing. Haunting. I think every teacher, parent, first-responder, teen, psychologist should read this one!” ~BJ Thompson

Questions for Julie? Leave them in the comments section below.

As a reminder, Beyond Broken Pencils was released on Tuesday, August 7, 2018 and is now available on Amazon. Connect with Julie Gilbert on Twitter and Facebook, or visit her website.