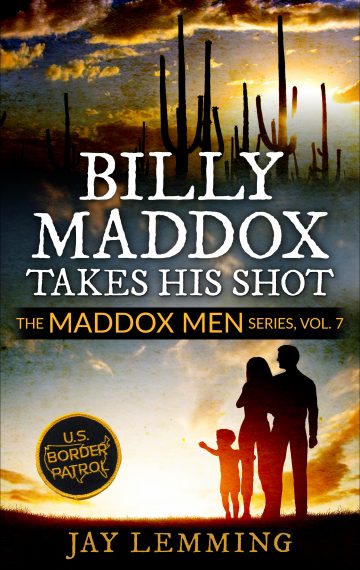 Billy Maddox Takes His Shot is Book 7 of the Maddox Men Series.

A brother’s death. An angry young man. One last chance to redeem himself.

Billy Maddox is a newly minted Border Patrol agent on the southwestern border of the United States fighting the odds that his life won’t collapse around him.

Still shocked years after his brother’s accidental death at the hands of drug smuggling criminals, Billy finds himself back on the international border near where tragedy took a deeply personal toll.

In this environment, Billy is on the ropes with his family. With a history of lost jobs and anger management issues, he faces his wife’s ultimatum: “Keep this job or I’m leaving and taking our son.” With a marriage in danger of crumbling toward separation, it is time for Billy to do the right thing.

It is 1999 and the Border Patrol is struggling to slow the rising tide of illegal border crossings and drug trafficking; more agents and deterrence technologies have been deployed to make a difference. But Billy cannot easily undo the legacy of an embittered, damaged father still traumatized by his younger son’s death. It is only when Billy experiences the friendship of the veteran agent assigned to train him that he finally has a chance to acknowledge the sorrow of his brother’s death.

Billy Maddox Takes His Shot is the coming-of-age story of an angry, young man on the verge of finding friendship with someone who can show him direction but also the potential loss of a spouse fed up with the symptoms of his complicated past. The novel, set among the smugglers, migrants and the saguaro plains of the Sonoran Desert, is Volume 7 from the Maddox Men Series, which includes the free short story, Billy and Darla, and the novel, Green Bay Outsiders.

The Maddox Men series recounts the history of multiple generations of the Maddox family men dating from the early 20th century to the present.