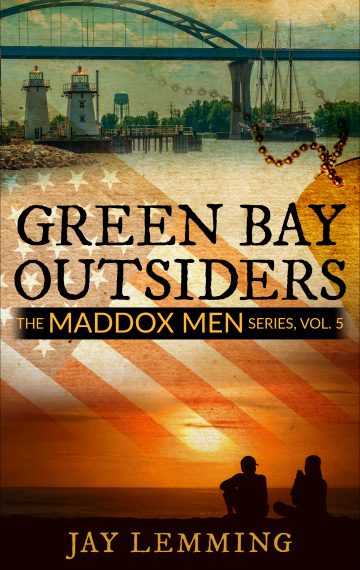 Green Bay Outsiders is Book 5 of the Maddox Men Series.

Raised in Green Bay, Wisconsin, Carl Daniels has a promising future with his first job out of college, a close group of friends and a budding romance. It’s all on the verge of going up in flames, however, as sudden yearnings to experience life away from the hometown lead to opposition from all sides. As Carl’s distracted thoughts unmoor him from friendships and as his mother’s strong opposition stirs memories of her strained relationship with a Vietnam vet brother, Carl grasps for some foundation.

But a random meeting with Border Patrol agents fishing out on Green Bay and an unexpected death raise the stakes for what must be his final decision. Will the criticism and social isolation of those he’s known all his life force Carl to turn from dreams of the horizon? Or will the weighty comforts of middle–class, suburban life lead him to pay the price of pain to earn a young man’s freedom in a large and frightening world?

Green Bay Outsiders, Volume 5 of the Maddox Men series, is a coming of age novel that recalls the tormented wanderings of Chris McCandless from Jon Krakauer’s Into the Wild and the restless flights of fancy from Thomas Wolfe’s Look Homeward, Angel. Protagonist Carl Daniels will later appear in Volume 7 of the Maddox Men series. Billy Maddox Takes His Shot.