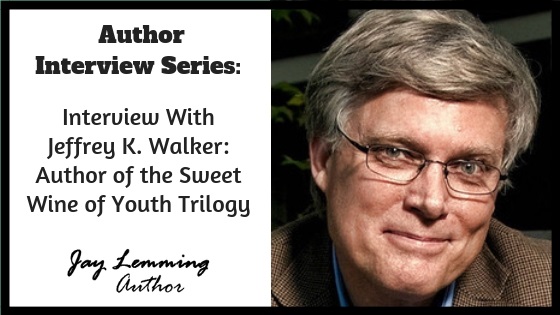 Jeffrey K. Walker hails from what was once the Glass Container Capital of the World, now just another dying town in Illinois. Jeff has had six careers—in his words, he just can’t seem to hold a job. A retired Air Force B-52 navigator-turned-JAG, Jeff served in Bosnia and Afghanistan, planned the Kosovo air campaign and later ran a State Department program in Baghdad. He’s been shelled, rocketed and sniped by various groups, all with bad aim. He’s lived in ten states and three foreign countries, managing to get graduate degrees from Syracuse, Georgetown and Harvard along the way. An attorney and professor, Jeff taught legal history at Georgetown, law of war at William & Mary and criminal and international law while an assistant dean at St. John’s University.

After leaving New York City and returning to Williamsburg, he began his sixth career as a writer. He has published two novels in his World War One and 1920’s trilogy, both receiving awards of distinction. Most recently, both None of Us the Same and Truly Are the Free were 2017 best fiction finalists in the UK-based The Wishing Shelf Book Awards; both are currently long-listed for the 2018 Goethe Award. None of Us the Same went on to receive the 2017 bronze medal for best fiction. Jeff and his wife, Kathy, with whom he’s moved nineteen times, have three children scattered around the US and one grandson who lives much too far away. Jeff has many hidden talents, but one which he will proudly reveal is that he has never been beaten at Whack-a-Mole.